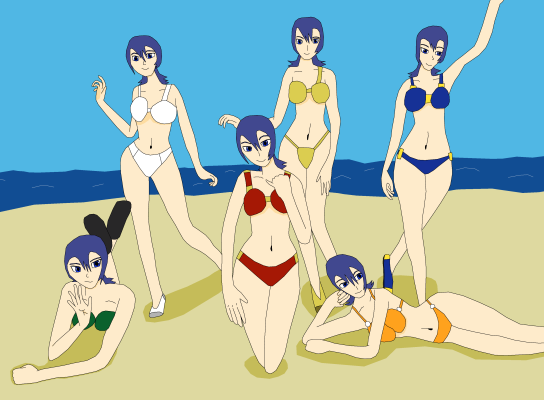 Behold my poorly done background XD Don’t mind the hands, I need to practice more on it. All Aquas (minus the one in blue) are the men that have been turned into her.

All in this fic belongs to Nintendo and Square Enix!

Xemnas groaned as he came two. He looked around at his surroundings.

“A forest?” he asked himself.

He sighed and got up. That’s when he noticed that he was on all fours.

He looked at himself and took note of the silver rings.

“It seems that I am an Umbreon,” he said.

He took one last look around before picking a direction and going. He took his time since there was no threat to him. Xemnas would even stop now and then to look around some more.

I can’t tell what forest I am in nor which game, he thought.

His ears moved behind him when there was a snap. He looked behind himself. Something ran behind a tree in the distance.

Was that a greenish gray Houndoom? Xemnas thought.

His eyes narrowed. He knew only one person with that skin color.

So Maleficent possible is behind all of this, he thought.

A girlish and boyish scream came from not too far away. Xemnas looked in the direction they came from. He ran. Once there Xemnas saw Roxas and Xion surrounded by Poochyenas and Mightyenas. Xemnas watched as Roxas landed on a Mightyena’s head and pecked him before getting shaken off. He, also, saw a Poochyena go through Xion making her get creep out. Xemnas took a deep breath.

“Umbreeee!” he shouted getting the attention of the Poochyenas and Mightyenas.

The Mightyenas and Poochyenas turned their attention back to Roxas and Xion. Roxas pecked the head of the same Mightyena while Xion dodged another Mightyena’s shadow ball. She, then, used nightshade on it, making it faint. Xemnas sighed before taking another deep breath.

Xemnas backed up a few steps before turning around and running. While the Mightyenas and Poochyena started chasing him. After a few minutes into the chase, it dawned on Xemnas.

Why did I save those two? He asked himself.

He shook his head.

I saved them because I still need them to help complete Kingdom Hearts, he thought, yes that’s-

His thoughts were cut short when a group of Houndooms and Houndours came at him on his left. A Houndoom pinned him down by the neck. A Poochyena was trying to drag him by one of his back legs. A Mightyena bit him on his back. Xemnas gasped in pain.

He started to spark.

“Die here!” he shouted letting lose an electrical charge shocking and fainting the three Pokemon that had him pinned down.

He got up and winced when pain shot through his back leg. Xemnas shook it off and started to run. Some Houndours and Mightyenas began to chase him again.

Why was I able to use an electric attack? He asked himself, Umbreons can’t learn any.

Xemnas made it to a lake. He jumped in and started swimming to the other side without noticing that his procurers had stopped.

“Superior!” he heard someone shout.

Just then something underneath him.

Gyarados! He thought in alarm.

He took a second to look for a place to jump to. He leaped to what he thought was a stable branch. It broke and Xemnas fall to the ground; farther injuring his back leg. He slowly got up and limped to the road. The pain had gotten too much for him. He closed his eyes.

“An Umbreon,” he heard a ten-year-old boy exclaimed.

“There’s a Pokemon Center near here,” said a ten-year-old girl.

Xemnas felt himself get lifted up. He yelp when his leg was touched. He only opened his eyes to see the road moving below him before slipping into unconsciousness.

Sorry, it’s short, but I didn’t want to go and farther on Xemnas’ tale without getting a bit farther in the other members. As for why Xemnas was able to electric move 1) I asked if it was okay and no one answered so I just went with it 2) Xemnas is possibly the body of Terra that Master Xehanort took/infused with and I picture Terra as a Jolteon.

As for why Xemnas saved Roxas and Xion. Maybe he did it in order to make sure Kingdom Hearts will be completed or maybe a little of Terra came out. Who knows for sure.

Special thanks to the program Grammarly!