All in this fic doesn’t belong to me!

Warning! Ooc Usopp a head. I tried to keep him in character as much as a I could, but I wanted him to be a bad ass so bad, that I couldn’t help XD

This is also an alternate universe for the Impel Down arc!

The cuff’s around his wrists were tight and so were the ones on his ankles. His hair fall over his face, hiding it away from those who went past his cell. He was at Impel Down on the second level. He started to wonder why he was here again ’till he remembered. They were separated. The Marines had found him before his crew. At first he was being use to bring Luffy out from where even he was “hiding”. He started to ask him self, would Luffy come for him? Did Luffy care enough to? It has been days since the marines took him. He doubted Luffy will. After all he was the weakest one out of all the members of the crew. The door to his cell open. Soulless charcoal eyes looked up at the officer.

“Usopp “Sogeking”,” he stated, “It’s time for you to go to Marineford.”

They took the shackles off of his ankles and pulled him up. They started to walk him to where a ship was docked. The other prisoners looked at him in sadness and relief that it wasn’t one of them that was going. Usopp was afraid of being caught by the marines, being put to death. Now he was just a hallow shell following them to his doom. One of the guards laughed.

“It’s a shame your captain didn’t come to get you out,” The guard said.

The other one smiled.

“Yeah,” that one said, “you must trying not worth Straw Hat’s time.”

Usopp didn’t respond. He didn’t even blink for wondered the same thing. Did Luffy cared about him? Did he said something wrong the last time they saw each other? If so then he was sorry. One of the guards pulled Usopp’s head toward the ground, nearly making him fall.

“You truly are worthless,” the guard said.

Worthless, Usopp repeated the word in his head, worthless.

Dark thoughts started to go through Usopp’s mind. Maybe that’s why Luffy didn’t come for him. Because he found Usopp too worthless to keep as a part of his crew, his family. If that was the case the Usopp would gladly accept his death. Light from the outside world fall upon them. Usopp had to close his eyes for a moment to see. He was skinner then usual and had dark bags under his eyes. A few wounds where on his back and arms due to the few torture sessions they gave him. Usopp took a deep breath when he saw the huge marine ship waiting to take him away.

Luffy was tapping his foot impatiently. He was outside waiting to speak with Hancock. He needed to leave the island immediately. He had just given the news about Usopp’s execution. He didn’t even know that Usopp was caught. Though he was a bit confused. Usopp’s bounty was low. So low that he shouldn’t have been put into such a high prison place like Impel Down.

Maybe it’s because he’s a part of my or that his dad is a part of Shanks’, Luffy thought.

He wasn’t too sure. One thing he was sure about, was the fact that they were, originally, using Usopp to get to him. Poor Usopp probably thinks that Luffy had abandon him. Luffy’s fists clutched and an angry look appeared on his face.

“Don’t worry Usopp I’ll get you back,” He said.

The next part will start the Marineford. XD I’m skipping the voyage that Luffy had.

Bloody Chaos belongs to me, all others belong to Fyre-Flye.

Note: please make sure to read the end note after the story!

Apple Bloom was racing to her sister, Applejack. She wanted to tell her about the pony she just met a few hours ago.

Apple Bloom ran to her out of breath. Applejack was with the rest of the main six. They all were looking at her.

“I just met somepony that lives in the Everfree Forest,” Apple Bloom said as soon as she got her breath back.

“That lives in the Everfree Forest?” Applejack asked, “what is a pony doing there?”

“He’s blind, tall as Princess Celestia, and really fun to play with,” Apple Bloom went on ignoring her sister’s questions.

“Can unicorns live that long?” she asked her.

“I have to do some research about it,” she said.

Rainbow Dash landed and seemed to be in thought.

“You said he was blind right?” she asked.

“He had a blindfold on,” she answered, “and Zecora told me that he couldn’t because something important was gone. What ever that means.”

“Silly I know what that means!” she said.

“You do?” everypony else asked.

“Yeah,” Pinkie Pie answered, “It means he’s sight is missing, gone off some where for somepony to find it.”

“Maybe Celestia know about him,” Twilight thought out loud.

“I’m going to go and get Sweety Bell and Skootaloo,” said Apple Bloom, forgetting to give Twilight the pony’s name, “let me know what the princess says!”

The little filly raced off.

When Twilight got home, she started looking for paper and a quail.

“Hey Twilight,” greeted Spike, “how was the picnic?”

“It was good,” she answered while holding up a piece of paper, “Spike where is my quail?”

“Over here,” Spike waved her over at the table.

Twilight picked it up with her magic and started writing.

“Did something happen Twilight?” asked Spike a bit worried.

“Apple Bloom came by and told us she met a pony that lives in the Everfree Forest,” Twilight answered, “I’m writing to Celestia to see if she knows him.”

She rolled up the letter and gave it to Spike for him to send.

“Now to see how long a unicorn can live up to,” Twilight said.

The Cutie Mark Crusaders were racing to Zecora’s hut.

“What if this pony you met isn’t there?” Sweety Bell asked.

“Then we’ll come back every day to see if he is.” Scootaloo answered.

Bloody Chaos had came back when he sensed one of the forest creatures heading in Zecora’s direction. He warned her about it. Zecora thanked him and offered him some tea. Chaos didn’t want to seem too rude and he was a bit thirsty, so he accepted. He was laying down beside the hut sipping the tea.

Chaos’ ears turned in the direction of the voice.

“And she brought a few friends too,” she informed, “no doubt to meet you.”

Chaos got into a position like he was asleep.

She smiled, knowing what he was planning. Zecora waved at the crusaders.

“Hello little ones,” she greeted.

“Hey Zecora,” Apple Bloom said, “is Chaos here? I have a few friends for him to meet.”

Zecora glanced behind her. The crusaders looked.

“Aw is he asleep?” Scootaloo asked.

Chaos let out a small snore.

Apple Bloom walked over to him and poked his nose.

“Leave him be child,” Zecora said acting out her part in his plan.

Chaos stretched and grabbed Apple Bloom, causing her to yelp. He rolled onto his back. Zecora grinned as she noticed two trails of magic sparks on the ground, heading to the other two. They were too busy watching Apple Bloom try to get out of Chaos’ hold to noticed the trails. They started to glow red and laugh. Zecora smiled and laughed at the scene.

Twilight, with Spike on her back, was racing to Zecora’s. Celestia had replied back that she needed more of a description of the blind pony.

Twilight’s ear shot up as she herd laughter. She stopped when she saw the crusaders flying in the air. Zecora was smiling and laughing at them.

“Whoo,” said Spike when he looked at Chaos.

Twilight looked over at him too. She was in aw. He was as tall as her teacher. He, also, had a long black mane and was a red color. His cutie mark was a black bat and he also had leg armor on.

Spike then started to fly with them.

“Hey this is fun!” he shouted.

After a few more minuets, Chaos sat them on his back. His horn still glow though. The magic sparks lead to Twilight, making her glow.

A sight spell, she thought.

Chaos turned to her and bowed. Twilight bowed too.

“Oh um, Twilight Sparkle,” she introduced herself, “U never seen a unicorn so tall before.”

“Yeah you’re as big as Princess Celestia,” said Spike who was insistently shushed by the crusaders.

Chaos’ ears twitched and the smile disappeared, replaced by a frown.

Chaos floated the fillies and Spike to the ground.

“That’s because I’m the same age as her,” he said, “and please don’t say her name around me.”

That got Twilight’s interest.

Chaos’ ears fall flat against his head and started to walk away, using his sight spell to guide him.

“I rather not talk about it,” he said before disappearing.

Twilight frowned. Something was eating away at him and she wanted to know.

Another letter from Twilight appeared in front of Celestia that night. She was currently in her chambers. She open it. She beamed when she read that the mysterious blind pony was Chaos. She smiled at all of the wonderful memories she had with him. The smile turned into a frown when she remembered the first letter mention him being blind.

I sure hope he didn’t do what I think he did, she thought.

When she read the last part, she gasped.

“Why would he regret knowing me?” she asked to no pony.

Her expression now, was one of hurt.

I need to see him again, she thought, I really want know why he regrets such a thing.

With a sigh Celestia laid her head down. She let her dreams take her away from her thoughts of Chaos for the night.

I tried looking up the age of death for a unicorn, but only found that they live forever

Dark’s wings are the hardest part in this @_@

XD I tried to make the Rasengan look like the … Rasengan. I failed at it though 😦 oh well at least Ino gets to look like a bad ass

They’re hugging. I put Loki in his suit because I can’t do his armor XD Maddie belongs to the requester, WolfWarrior172 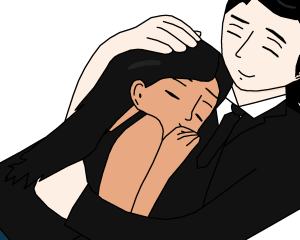 This one took a while. On the right she is star gazing with her dad, Dusk. On the left is her mom, Twilight, sing her to sleep. Twinkle Star belongs to the requester, Kinslayer023 while Dusk belongs to Peanutcat 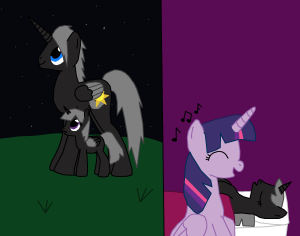 I’m happy with how this turned out 😀 Xylia belongs to the requester, BaconBaka

I think I made Starbright too big ^^; plus I had a hard time getting Peppy Pines’ cutie mark to look god 😦 Starbright belongs to the requester, 00Mystic-Artist while Peppy Pines belongs to pepooni 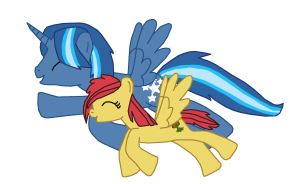 Will have to redo this one

it was suppose to be Spider smacking Qana’s butt. Characters belong to the requester, CragmiteBlaster. Updated version now added!

This was requested by Keaton-Corrine on Devianart. Color based on their cloths. Usopp was going to have a horn instead of wings, but I couldn’t figure out how to put it through his hat. ~Fuzzylittlekitty